We created this system as a part of a series of studies examining the potential VR systems that could be built using off-the-shelf components and some do-it-yourself maker-movement style prototyping.  The resulting system uses a belt-mounted electromagnetic tracking system (Razer Hydra) interfaced to an iPod Touch running a VR application through WiFi, with a Raspberry Pi as a broker.  The iPod Touch is viewed through a custom 3D-printed viewer with high-strength magnifying lenses and head-mounted through ski-goggles.   The resulting system offers 6-degree of freedom head-tracking and joystick tracking for seated VR experiences. The Ubiquitous VR system has been used extensively in the dissertation titled Designing and evaluating ubiquitous wearable virtual reality by Aryabrata Basu. 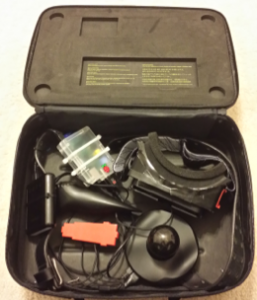